20 years ago today, my life changed. Suddenly and horribly. 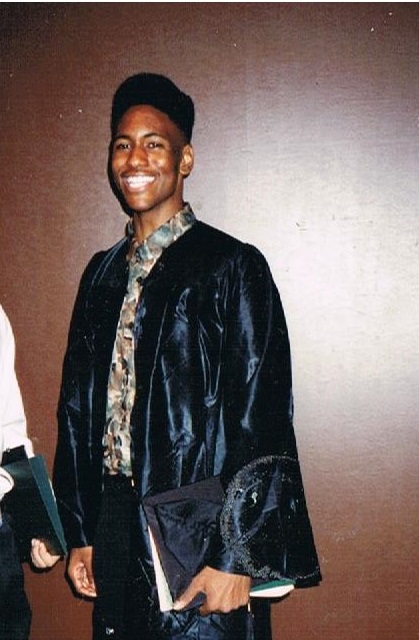 Prince Jones, graduation from the Texas Academy of Mathematics and Science, 1992.

One of my closest friends from high school was a young black man named Prince Jones, part of my first great gaming group. Every Friday night, we saved the world by rolling around strangely-shaped dice in a crowded dorm room. It is  difficult to describe Prince without sounding like I am indulging in hyperbole. I’m not. Prince was the most great-hearted and magnetic individual I’ve known. If anyone who ever met him didn’t develop a powerful affection for him, I’ve yet to hear of it.

We went to high school at a concurrent-enrollment STEM accelerator, at a time when such programs were not only unusual but damn near unique. What I am getting is that a case could be made that I went to high school with 300 of the smartest kids in Texas (well, 299 of the smartest kids in Texas and me) and, yet, Prince was the one we all looked at and said, “Him. He’s the one who is going to make the world a better place.”

On the evening of September 1, 2000, Prince, then a student at Howard University, was driving to meet his fiancée. Prince was followed by an officer of the Prince George County, Maryland, police department traveling in an unmarked car. After pinning Prince’s vehicle in with his own, the officer failed to display a badge or identity himself as a police officer. In the resulting confrontation with a man he had no reason to suspect was an officer, Prince was shot six times and died at the scene.

I know the real tragedy that day was for Prince, his family, and those who were closest to him in 2000. But it would difficult to overstate the impact his death had on me. As a privileged white kid from the suburbs, this was my first real awareness that “maybe everything’s not going to be okay” and my first inkling of the kind of calculations and concerns that tens of millions of Americans deal with as they walk around on a daily basis.

The Prince George County police department and district attorney’s office responded to Prince’s murder with the same vague answers-that-aren’t-really-answers, hackneyed phrases (“matched the description of a suspect”), and slanderous ad hominem that still appear every week in the news. I vividly remember a news article quoting the county DA as saying “He [Prince] didn’t sound like a very sympathetic character.” That’s not true. It’s about the farthest thing from true imaginable. But, even if it was, it shouldn’t matter. Neither being a less than stellar human nor failure to comply justify execution.

But Prince was a stellar human being. Possibly the most stellar human being I’ve ever known. It’s 20 years later, I’ve been a lot of places and met a lot of people. And yet my gut tells me, of all of them, Prince still had the capability to effect the greatest positive change in the world. I don’t know exactly what that would have been, whatever it was, it’s gone now.

It is a tiny comfort that a civil trial found the officer liable for wrongful death and awarded Prince’s daughter a settlement that, while it will help her through the practical matters of life, will never restore lost decades with her father to her.

I know my friends are a compassionate, empathetic bunch. That’s why you’re my friends. It’s also why I ask that, if you respond to this post, don’t do it with kind words intended to sooth me or make me feel better. It’s not okay that this happened. In fact, it’s the opposite of okay. Nothing will ever be able to put this right. The best we can hope for is working to ensure what happened to Prince doesn’t happen to others.