ROLL YOUR DICE – AND STEP THROUGH TIME

Paradoxes & Possibilities is a complete, standalone RPG that will take you and your friends into the farthest reaches of time!

A love letter to classic time travel series and films, Paradoxes & Possibilities brings the same joyful adventure and exploration to your gaming table.

Paradoxes & Possibilities features everything you need to play right out of the box (except for your trusty dice and friends).

“Ghost Stories” is a P&P mini-campaign pitting characters against a rogue time traveler, and failed horror writer, who has a most unusual agenda. Frustrated with lack of literary success in his present time, he has traveled back the shores of Lake Geneva, Switzerland in the “wet, ungenial summer” of 1816. Ingratiating himself into the illustrious literary company of Lord Byron, Mary and Percy Shelley, John Polidori, and Claire Clairmont as they begin the celebrated ghost story competition that lays the foundation of modern horror, he is determined to inject his peculiar “vision of horror” into the genre’s very beginning…with unanticipated consequences for the timestream.

Tracking him to 1816, players must thwart his efforts, right the time stream and return horror to its natural course…hopefully without provoking the rogue time traveler from doing something drastic which risks shattering paradox.

“Ghost Stories” is a social-heavy campaign with action focusing on the interactions and relationships between PCs and five of the nineteenth century’s most gifted and eccentric literary talents, complicated by the rogue time traveler’s presence. The campaign features several aids for the Time Master, including extensive biographical material and suggestions from bringing the historical NPCs to life, a chronology of events at Villa Diodoti, social and geographical info for 1816 Lake Geneva, suggestions for both serious and campy versions of the campaign, and ideas for several nasty complications the rogue time travel can throw in the party’s way. Also provided are worksheets to help Time Masters track the NPCs evolving relationships with the PCs and the rogue time traveler.

If you’re looking for adventure, welcome to the club . . .

The local tavern gets an update for modern times in GURPS Encounters: Harrowed Hearts Club. Quickly design your own establishment (including features and details), then fill it with interesting staff and patrons. Add paranormal elements to the club with appropriate powers and random supernatural events. A sample club history and four encounters make this a ready-to-use resource for GURPS Action, GURPS Monster Hunters, GURPS Horror, and other modern or near-modern settings. Each encounter includes the key events and actors, plus insight into how heroes and campaigns might best approach it. There’s always time for another round of adventure, compliments of the club!

Review of The Harrowed Hearts Club by the Blind Mapmaker.

Q&A about The Harrowed Hearts Club, including descriptions about the four adventure seeds.

A suggested playlist for The Harrowed Hearts Club adventure seeds.

Pyramid #3/117: Hotspots: featuring my article, City of Lights, City of Blackouts, a mini-suppliment for gaming Paris 1900-1945. Available from Steve Jackson Games in eBook format as part of their GURPS system. Why there? Why then? Consider the piece’s intro: 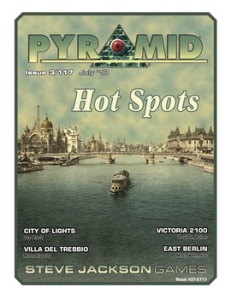 Throughout the first half of the 20th century, Paris was shorthand for modernity’s perils and pleasures. Daring new movements in the arts overthrew centuries of tradition. A vibrant if rapacious underworld with an eye for the big score sometimes blurred the line between heroes and villains. Urban explorers known as flâneurs walked wide boulevards and ancient alleyways seeking the city’s secrets. The Great War made Paris the poster child for modern conflict’s harsh realities. In the next war, occupied Paris was the snatched jewel epitomizing the Axis threat, even as the Resistance ensured the occupiers never slept soundly. In short, Paris 1900-1945 offers almost everything gamers could want.

The suppliment provides more then 150 important events, essential locations, colorful characters, and adventure seeds for gaming one of the world’s great cities.

Pyramid #3/95: Overland Adventures, featuring my article The Village Green.  Available from Steve Jackson Games in eBook format as part of their GURPS system. 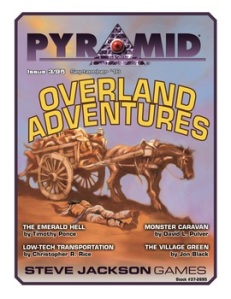 Not every encounter along the winding path is waiting to kill you; sometimes you find yourself standing in tranquil contentment amid The Village Green. This article transforms the humble village, at best a base for adventure, at worst a hackneyed bit of local color, into a location of excitement, opportunity, and even danger in its own right. The article discusses common social and physical features of villages and offers game mechanics for key village archetypes. Nonhuman villages, in light of common fantasy conventions, are examined. Several village-based adventure seeds are also offered.

Pyramid #3/93: Cops and Lawyers, featuring my article Sultans, Shurta, and the Courts.  Available from Steve Jackson Games in eBook format as part of their GURPS system. 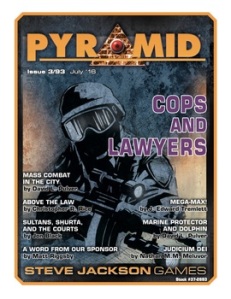 For campaigns ranging from Arabian Nights high fantasy to historical palace intrigue or the crusades, the legal systems of the classical Islamic world offer a wealth of roleplaying opportunities. This piece provides a roleplaying-friendly summary of the
region’s jurisprudence and legal practices from the period of 632 to 1800. Article includes a short historical summary, glossary of key terms, game mechanics for resolving legal disputes and adventure seeds. 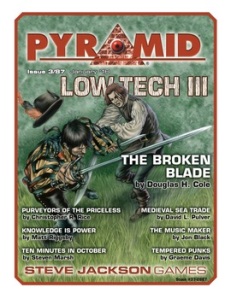 Cameos by historical figures are one of the joys of historical campaign. The Music Maker examines the gifted and enigmatic instrument maker Stradivarius. Stats are provided are provided for using Stradivarius as an NPC, a discussion of his instruments, and descriptions for encountering him in his hometown of Cremona, Italy. The article includes mechanics for designing other elite artisans modeled of Stradivarius, ideas for using the master in various types of campaigns,  as well as adventure seeds.

Pyramid #3/85: Cutting Edge, featuring my article Remixing the Rocker.  Available from Steve Jackson Games in eBook format as part of their GURPS system. 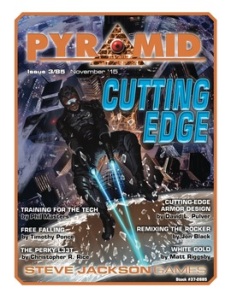 The rocker, the diva, the idoru, are all fixtures of near-future, cyberpunk, and dystopian sci-fi and gaming as the sounds of the street take the fight to the prefab tunes of the mega-corporations.  Remixing the Rocker looks at the future of both music and musicians in a gaming context. It discusses future trends and directions, game mechanics for changing technology, and even the possibility of using music for mind control or healing.  The “Hooks and Grooves” section offers seven near-future music-themed adventure seeds for a variety of campaign flavors.

Pyramid #3/82: Magical Creations, featuring my article Instruments of Enchantment.  Available from Steve Jackson Games in eBook format as part of their GURPS system. 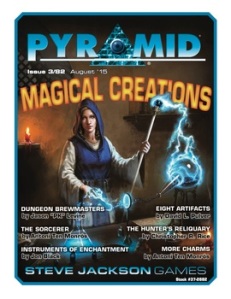 Instruments of Enchantment, looks at the magical potential of musical instruments, especially as it intersects with GURPS Thaumatology. Discusses common ancient, medieval, and Renaissance instruments from a variety of cultures for use by PCs and NPCs. Careful examination is given to the construction and enchantment of magical instruments using GURPS mechanics. It also offers six sample instruments that can unleash amazing power in the hands of the right musician: the Damsel’s Alicorn, DoomBellows, Dryad Fingers, Heart of the Ancestors, Orchestra in a Box, and the Ultimus Claves.

Pyramid #3/81: Horrific Creations, featuring my article Anatomy of a Crossroads Bargin.  Available from Steve Jackson Games in eBook format as part of their GURPS system. 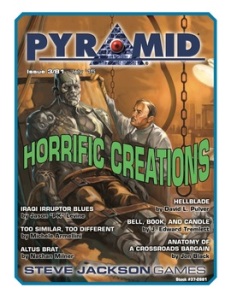 Anatomy of a Crossroads Bargain looks at the history and roleplaying aspects of this very specific and thematic variation of selling one’s soul. Opening with a historical context, with a special focus on music, it provides game mechanics for appropriate GURPS traits to represent a bargain, and even “escape clauses” to come back from the brink! The article provides several sample bargains, suggestions for roleplaying such infernal dealings,