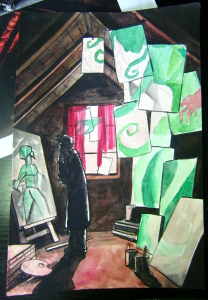 “An enthralling and disturbing story in equal measure,”

“… opens with a hook that grabbed me immediately.”

“….a detailed and fascinating look at pre-1914 Paris, with Black deftly bringing to life a city of duality; a snobbish and charming exterior that has a chaotic underworld, one full of artists, pimps, anarchists and a thousand other types. 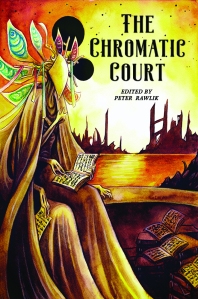 Those are a few of the choicer words I found in a review of my Mythos novelette “The Green Muse” by the Sci-Fi & Fantasy Reviewer (as part of a broader review of the anthology The Chromatic Court, published by 18th Wall Productions) back in April.

While I’m disappointed it passed without my notice when first published, it was a wonderful surprise to stumble across such an effusive review by accident. And I can’t tell you how oddly happy it makes me that someone finds my work “disturbing.”

I have, of course, presented the entire text of the review of “The Green Muse” below.    And I’ve written in-depth about the story elsewhere on this site and I invite you to read an excerpt  You’ll find the Sci-Fi & Fantasy Reviewer’s full review of The Chromatic Court here.

“Following on is The Green Muse by Jon Black, another story that opens with a hook that grabbed me immediately. A rash of murders in early 20th Century Paris attracts the attention of the media; but the murders are of cubist painters, people who produce a type of art reviled by more conservative lovers of art. An art journalist is assigned the job of doing undercover and learning more about the murders, with the aim of producing salacious, gossipy articles that will discredit cubism forever. That’s an amazing concept, and I loved the snark in the opening pages about various types of artist, the (real-life) snobbery to be found in the heat of competition between hierarchies of artists, and the conferring of respectability.

“But of course this is Cosmic Horror and not mere historical crime fiction, and it soon becomes clear the dead artists had stumbled into something eldritch to do with their paintings. As the investigation begins, we get a detailed and fascinating look at pre-1914 Paris, with Black deftly bringing to life a city of duality; a snobbish and charming exterior that has a chaotic underworld, one full of artists, pimps, anarchists and a thousand other types. It’s intensely atmospheric writing, and makes the weird, unsettling nature of the murders feel somehow integral both to the nature of the Cubist artists, and the city’s anarchistic culture at that time. I really enjoyed the central mystery that unfolds, becoming more eldritch and unsettlingly ill-defined as time goes on, and the way that Black is able to make the theoretical underpinnings and philosophy of Cubism so central to that mystery. There’s even a cameo from the previous story, The Man in Purple Tatters, which is much appreciated and helps build a shared universe between stories. An enthralling and disturbing story in equal measure, The Green Muse is another stand-out tale in the anthology.”